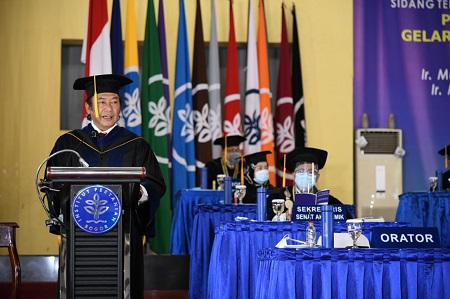 The dedication of Ir Muhammad Gunung Soetopo and the late Ir Mohammad Nadjikh in implementing their knowledge for the country, encouraged IPB University to award the title of Honorary Doctor or Doctor Honoris Causa to both of them. The awarding of this honorary title was carried out at the Open Session which was held on Saturday, October 24, 2020 and broadcast live streaming on YouTube IPB TV.

"The characteristics of IPB alumni cannot be separated from three keys, namely integrity, innovation and inspiration. Our appreciation for those who have integrity and inspiration. IPB can give honorary titles to individuals who contribute to the welfare of mankind. Congratulations to Ir. Muhammad Gunung Soetopo and The late Ir Mohammad Nadjikh, who has fulfilled the requirements in obtaining the title of Honorary Doctor or Doctor Honoris Causa, "said Prof. Arif Satria as Rector of IPB University.

Prof. Dr. M Syukur conveyed that the awarding of honorary doctorates to these two figures was based on the results of the decision of the Plenary Session of the Academic Senate (SA) of IPB University on August 27, 2020 which determined and approved the awarding of an honorary doctorate (Doctor Honoris Causa) to Ir Muhammad Gunung Soetopo in the field of Soil Science and Ir Muhammad Nadjikh (late) in the field of Agricultural Industrial Technology.

Ir Muhammad Gunung Soetopo who is familiarly called Gun Soetopo is a 1982 graduate of Bachelor of Soil Science, Faculty of Agriculture, IPB University who has consistently pursued the field of agriculture in Indonesia. Because of his high motivation to become a farmer, his job as a Civil Servant (PNS) was abandoned after three years.

Gun Soetopo, with his creations and innovations (Krenova) succeeded in transforming the ex-mining land into a dragon fruit plantation called Sabisa Farm. The effort to build agriculture with a techno-socio-entrepreneurship character has resulted in extraordinary achievements and impacts for the development of the fields of science, technology, social, humanity and society for agricultural development in Indonesia.

Prof. Dr. Budi Mulyanto, as the promoter of Gun Soetopo in his presentation said, "Gun Soetopo deserves to get an honorary doctorate because of his work and real works in transferring knowledge and technology to society." In his oration, Gun Soetopo said, "Farming if you do it with your heart, then the work is simple. The key to developing marginal land for dragon fruit cultivation is the courage to start and not hesitate. Don't hesitate. If you have started, you have to be brave, there will definitely be. the result. Intention, determination, and desperation. Break, break, break. "

Tracing Gun Soetopo's journey, we find the fact that he has made various efforts. Starting from collecting market waste for compost, collecting coconut husks to make planting media for ornamental plants (suplir, orchids and various other ornamental plants), collecting soil under bamboo clumps to be used as a nursery medium, producing fruit plant seeds, and planting. for the production of various fruits on various types of soil.

After gaining various experiences in utilizing land by planting various types of horticultural crops, Gun Soetopo condensed the results of his deep, focused and serious learning in the form of Philosophical Formulas, Principle Formulations, and Grid Formulations to compile creations and innovations (Krenova) for Marginal Land Utilization for Horticultural Crop Production in Indonesia.

This Krenova is in the form of science, technology, motivation, and principles which are practical steps in exploiting marginal land to build, increase efficiency and maintain sustainability of the performance of the land used in producing premium yields with integrity.

The transfer and implementation of various Krenova to other people or the wider community in various parts of Indonesia has succeeded in exploiting marginal lands. For example, rocky land, karst land, fire-affected peatlands, dry land, ex-mining land and other lands that are now 25 Fruit Horticultural Gardens, which are centers of fruit production, education and training places and tourist attractions. These gardens have become one of the tourist destinations with hundreds (100) of visitors per month in each garden, thus significantly increasing regional economic activity.

Meanwhile, the late Ir M Nadjikh, for his outstanding contribution for more than 25 years in the production and processing of Indonesian marine fishery products (seafood industry), also deserves this honorary title. The late Ir Nadjikh with his company called the Kelola Group, which houses 32 companies with 14,000 employees, was able to meet the demand for the seafood market in 30 countries. From America, Europe, Japan, Canada, Russia, Singapore and Middle Eastern and African countries.

According to Prof. Anas M Fauzi, Ir M Nadjikh passed away on April 17, 2020. Considering that the process of preparing the document for the Proposal for the Awarding of the Honorary Doctorate Degree of Ir M Nadjikh is ongoing and refers to the Regulation of the Academic Senate of IPB number 07 / SA-IPB / P / 2015 concerning IPB Award Giving Norms, then the proposal process will continue.

"The deceased had the belief that without collaboration it would be difficult to produce export commodities. Collaboration among them was perfected by the government as a catalyst. Various supporting elements are still not enough. The most important thing is worship of Allah. This has proven to have given smiles to farmers and fishermen, "said Dr Illah Sailah, who was also the promoter of the late Ir M Nadjikh. These points are the supporters of his enormous work so that he deserves to be awarded the Honorary Doctorate Award.(IAAS/NAS)